Highly radioactive materials have been found in a town near the damaged Fukushima Daiichi nuclear power plant. The plant operator says they are likely to have been contaminated in the March 2011 nuclear accident.  Four radioactive objects were found last month and this month on the riverbed of the Ide River that runs through Naraha Town in Fukushima Prefecture.  Tokyo Electric Power Company checked the radioactive cesium in the materials. The utility says the ratio of cesium 137, whose half-life is about 30 years, is higher than that of cesium 134, whose half-life is about 2 years.  TEPCO says a similar ratio is found in materials more than 2 years after radioactive contamination.  The company says it is trying to identify the objects. It is not known why they were discovered about 15 kilometers from the nuclear plant.  TEPCO officials say it is possible they were blown by hydrogen explosions in the 2011 disaster or were emitted by the plant around that time.
Jul. 23, 2013 - Updated 23:19 UTC

Decontamination to reduce radioactive pollution caused by the Fukushima Daiichi nuclear accident has been slow, and its effectiveness has been called into question.  NHK compared data from before and after decontamination at 43 districts in 21 municipalities across Fukushima Prefecture.  In 33 of the districts, or 77 percent of the total, radiation levels were still higher than the government-set standard of one millisievert per year.  In areas near the Fukushima Daiichi nuclear plant, where decontamination has been carried out on an experimental basis, radiation levels remain 10 to 60 times higher than the official limit.  The Environment Ministry says decontamination had only been conducted in about 3 percent of residential areas in the evacuation zone as of the end of March.
Jul. 23, 2013 - Updated 11:55 UTC

Experts estimate that cleaning up radioactivity in Fukushima Prefecture would cost 50 billion dollars, more than 4 times the amount that has been earmarked.  Experts from the National Institute of Advanced Industrial Science and Technology studied the cost of decontamination for the Fukushima Daiichi nuclear accident.  They estimate that decontamination in no-entry zones will cost up to 20 billion dollars, and in other areas, 31 billion dollars.  The estimate is based on the government-set unit costs and information provided by municipalities. It includes the cost of removing, transporting and storing radioactive waste such as contaminated soil.  The central government has so far allocated about 11 billion dollars for the cleanup, but has not made clear what the total cost might be.  The project is substantially behind schedule. Critics question its effectiveness, as radiation levels remain high in some areas even after decontamination.  A member of the group, Junko Nakanishi, says the government is conducting the work without knowing how much it would cost to achieve the level that would meet residents' expectations.  She says the government should study cost performance before deciding whether to complete the decontamination or reallocate the money to help people rebuild their lives.
Jul. 23, 2013 - Updated 10:36 UTC

A senior official of Japan's nuclear regulator has rebuked the operator of the Fukushima Daiichi nuclear power plant for being too slow to find ways to stop contaminated groundwater from seeping into the ocean.  Highly radioactive water has been detected in the plant's monitoring wells near the Pacific Ocean since May.  On Monday, Tokyo Electric Power Company admitted for the first time that tainted water is leaking into the ocean. TEPCO reached the conclusion after analyzing data on water levels in the wells in relation to tide levels.  The Nuclear Regulation Authority plans to study ways to determine the origin of the contamination, as well as measures to stop the leak at its meeting on Monday next week.
Jul. 23, 2013 - Updated 10:36 UTC

Fishermen in Fukushima angry at TEPCO over leak

Fishermen in Fukushima have expressed anger at Tokyo Electric Power Company's acknowledgement on Monday that contaminated underground water is seeping into the ocean.  About 100 fishermen attended a private briefing session on Tuesday by the operator of the crippled Fukushima Daiichi nuclear plant.  Officials from the utility reportedly said the contaminated water hasn't spread much. They also explained their plan to build walls along the coast to prevent tainted water from leaking into the ocean.  Some fishermen reportedly said Tokyo Electric Power Company officials may have deliberately concealed the information. Others said they cannot trust the firm.  Fishermen are also worried about the impact of the announcement on their plan to resume fishing on a trial basis in September.  The head of a local fisheries cooperative said they will not be able to reassure consumers by drawing a line in the sea to separate safe and contaminated areas.  He said TEPCO's announcement has dealt a serious blow to their plan to resume fishing.
Jul. 23, 2013 - Updated 10:36 UTC
Publié par olivier à 11:42 Aucun commentaire: 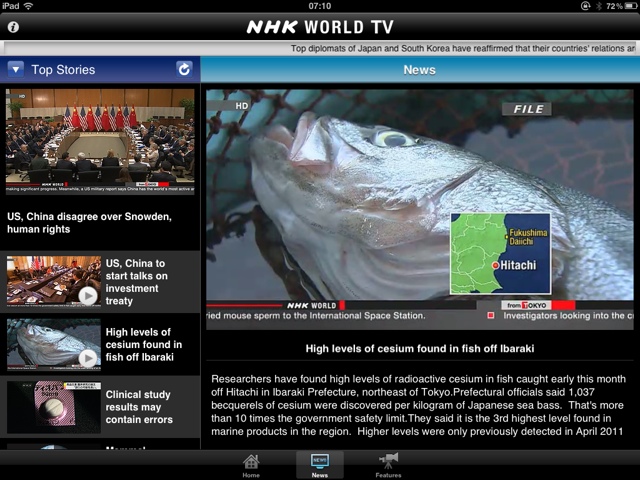 Researchers have found high levels of radioactive cesium in fish caught early this month off Hitachi in Ibaraki Prefecture, northeast of Tokyo.Prefectural officials said 1,037 becquerels of cesium were discovered per kilogram of Japanese sea bass.  That's more than 10 times the government safety limit.They said it is the 3rd highest level found in marine products in the region.  Higher levels were only previously detected in April 2011 -- one month after the Fukushima nuclear accident.  The contaminated fish then was sand lance.The officials said the sea-bass shipment will not hit the market as it does not meet government restrictions.They admitted they don't know why such a high dose was detected more than 2 years after the accident.But they said they are working hard to keep the food supply safe.  Jul. 11, 2013 - Updated 18:05
Publié par olivier à 07:12 Aucun commentaire:

The operator of the Fukushima Daiichi nuclear plant says high levels of radioactive cesium in groundwater may be due to soil mixed into the water.Tokyo Electric Power Company announced on Tuesday that the level of radioactive cesium in a newly-dug well between the No. 2 reactor and the ocean increased 100 times over the previous 5 days.The reading was taken close to a site where highly radioactive water from the reactor leaked into the ocean after the nuclear accident in 2011.In a news conference on Wednesday, officials said that after they filtered the water sample and measured it again, the cesium reading dropped to levels recorded 5 days earlier.They said contaminated soil could be to blame for the higher readings in the groundwater, and that the soil was likely mixed with the water when workers pumped up a sample for testing.But the operator said it has not ruled out other causes, and will continue investigating.Japan's Nuclear Regulation Authority says it will check other wells near the No. 3 and 4 reactors, as water in those wells is contaminated with cesium as well.
Jul. 10, 2013 - Updated 19:04 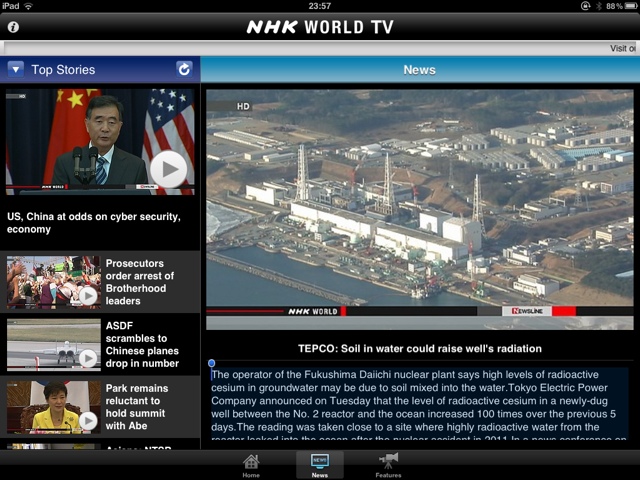 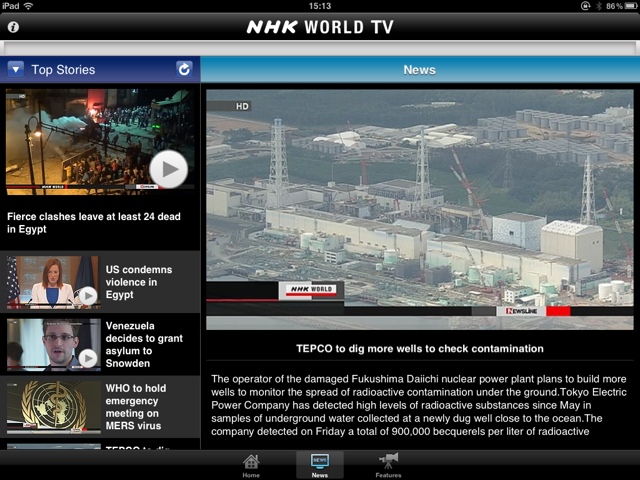