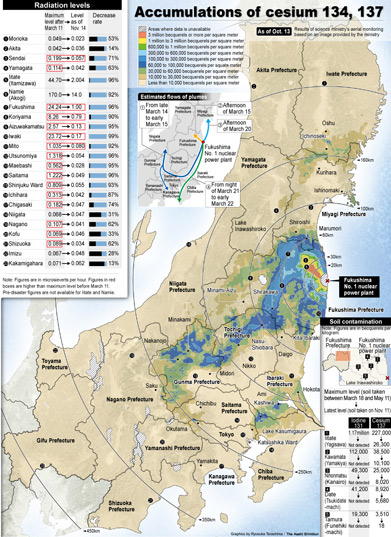 Cesium from Fukushima plant fell all over Japan
BY HIROSHI ISHIZUKA STAFF WRITER
2011/11/27
Radioactive substances from the crippled Fukushima No. 1 nuclear power plant have now been confirmed in all prefectures, including Uruma, Okinawa Prefecture, about 1,700 kilometers from the plant, according to the science ministry. 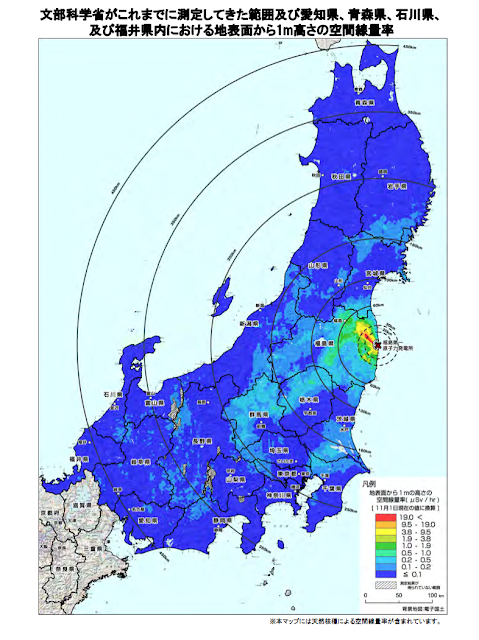 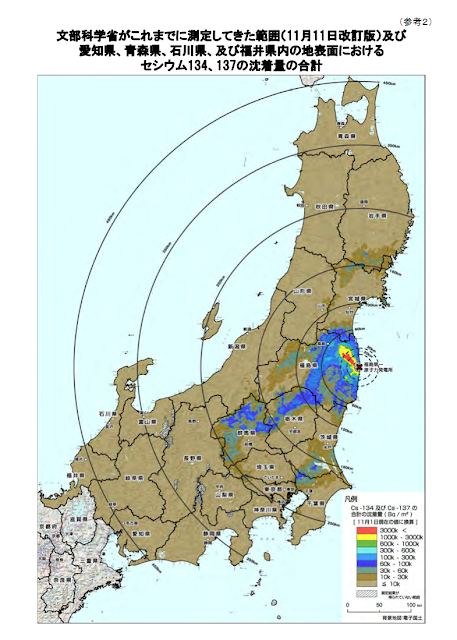 The ministry said it concluded the radioactive substances came from the stricken nuclear plant because, in all cases, they contained cesium-134, which has short half-life of two years.
Before the March 11 Great East Japan Earthquake, radioactive substance were barely detectable in most areas.
But the Ministry of Education, Culture, Sports, Science and Technology's survey results released on Nov. 25 showed that fallout from the Fukushima plant has spread across Japan. The survey covered the cumulative densities of radioactive substances in dust that fell into receptacles during the four months from March through June.
Figures were not available for Miyagi and Fukushima prefectures, where the measurement equipment was rendered inoperable by the March 11 disaster.
One measurement station was used for each of the other 45 prefectures.
The highest combined cumulative density of radioactive cesium-134 and cesium-137 was found in Hitachinaka, Ibaraki Prefecture, at 40,801 becquerels per square meter. That was followed by 22,570 becquerels per square meter in Yamagata, the capital of Yamagata Prefecture, and 17,354 becquerels per square meter in Tokyo's Shinjuku Ward.
The current air radiation level in Ibaraki Prefecture is about 0.14 microsievert per hour, equivalent to an annual dose of about 1 millisievert, the safety limit for exposure under normal time international standards.
Large amounts of radioactive dust fell in Tokyo, but a separate survey has detected relatively low accumulations of cesium in the soil.
"Tokyo has smaller soil surfaces than other prefectures, but road and concrete surfaces are less prone to fixate cesium deposits, which were probably diffused by the wind and rain," a ministry official explained.
The fallout densities were considerably lower in the Chugoku and Kyushu regions in western Japan. The smallest figure of 0.378 becquerel per square meter came from Uto, Kumamoto Prefecture. The density in Osaka was 18.9 becquerels per square meter.
The peak value in Ibaraki Prefecture was 970,000 times larger than the cumulative fallout density of 0.042 becquerel per square meter in fiscal 2009, found in an earlier nationwide survey before the Fukushima crisis started.
Before the accident, cesium-137, which has a longer half-life of 30 years, had been detected from time to time from atmospheric nuclear tests. But those densities mostly stayed below 1 becquerel per square meter, while cesium-134, with a shorter half-life, was rarely detected, the ministry officials said.
Also on Nov. 25, the science ministry released maps of aerially measured radioactive cesium from the Fukushima plant that accumulated in Aomori, Ishikawa, Fukui and Aichi prefectures.
This was the final batch of the 22 prefectures in eastern Japan where mapping was to be completed by the end of this year.
Nowhere in the four prefectures did the accumulations exceed 10,000 becquerels per square meter, the threshold for defining an area as being affected by the nuclear accident. This reconfirmed the science ministry's view that radioactive plumes wafted only as far west as the border of Gunma and Nagano prefectures and as far north as the border of Miyagi and Iwate prefectures, ministry officials said.
The ministry also confirmed that radioactive plumes tended to drift just short of mountain ranges where they formed belts of high cesium concentrations due to rainfall and other factors. The mountain ranges included the Ou and Iide mountains along the border of Yamagata and Fukushima prefectures, the Echigo mountains along the border of Fukushima and Niigata prefectures, the Shimotsuke mountains along the border of Fukushima and Tochigi prefectures, and the Kanto mountains along the border of Gunma and Nagano prefectures.
These patterns are shown in three-dimensional plots in an online Japanese-language document released by the science ministry (http://bit.ly/unIfH0).
The ministry also said Nov. 25 that it will conduct aerial measurements of cesium accumulations in soil in regions outside the 22 prefectures starting next year. That is because small amounts of cesium have been detected in dust deposits in Hokkaido and western Japan.
Publié par olivier à 16:41