planning to decommission the 2 reactors at its Fukushima Daiich

Tokyo Electric Power Company is planning to decommission the 2 reactors at its Fukushima Daiichi nuclear plant that were not seriously damaged in the March 2011 disaster.TEPCO officials said they will first consult with officials in Fukushima Prefecture and in the towns of Futaba and Okuma.  An official decision to decommission the Number 5 and 6 reactors could come next month.TEPCO is already engaged in work related to decommissioning the 4 other reactors at the plant, which were severely damaged.Prime Minister Shinzo Abe urged TEPCO in September to decommission the Number 5 and 6 reactors and concentrate on responding to problems caused by the March 2011 nuclear accident.The utility plans to use facilities at the plant for training workers involved in decommissioning the 4 severely damaged reactors.TEPCO is already organizing funding for decommissioning the other 2 reactors. But the company is expected to fall short by 267 million dollars if the official decision to decommission is made during the current fiscal year.The utility is allowed to cover the shortfall by raising power rates.  Nov. 20, 2013 - Updated 05:57 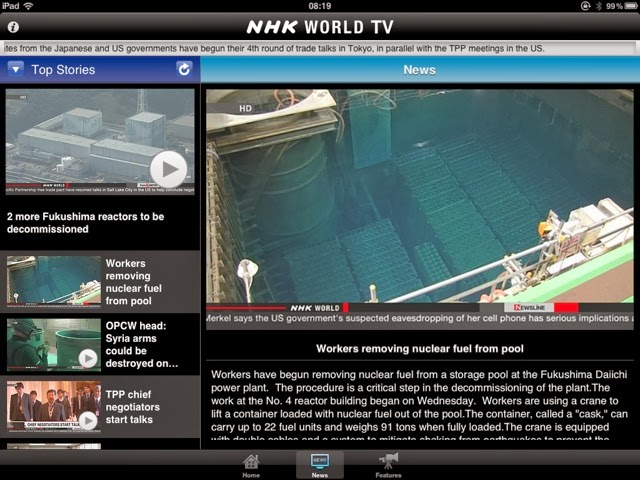 Workers have begun removing nuclear fuel from a storage pool at the Fukushima Daiichi power plant.  The procedure is a critical step in the decommissioning of the plant.The work at the No. 4 reactor building began on Wednesday.  Workers are using a crane to lift a container loaded with nuclear fuel out of the pool.The container, called a "cask," can carry up to 22 fuel units and weighs 91 tons when fully loaded.The crane is equipped with double cables and a system to mitigate shaking from earthquakes to prevent the cask from falling.  Radioactive material could leak if this happens.Once the cask is out of the pool, workers will remove radioactive substances from its surface, and transfer it to another storage pool about 100 meters away.The workers have spent the past 2 days transferring nuclear fuel units into the container.  They performed this part of the task inside the pool with an underwater camera. Small pieces of debris that fell into the pool during the 2011 accident have made it hard to see.Tokyo Electric Power Company aims to complete the transfer of the fuel units at the No. 4 reactor building by the end of next year.  The pool has 1,533 fuel units, and 1,331 of them contain highly radioactive spent fuel.  Nov. 20, 2013 - Updated 06:09
Publié par olivier à 08:20